The Dorchester on Park Lane is one of the world’s most prestigious and expensive hotels and it has been popular with the rich and famous since its opening in 1931. Although it’s not anywhere near as old as some of the other luxury hotels in the Mayfair area, it can still boast actors, models and rock starts as its clientele and in 1947 the Queen was a guest too. The Dorchester played an important role during World War II as it was one of London’s safest buildings due to the strength of its construction. In the 1980s the hotel was classified as a Grade II listed building and was then purchased by the Sultan of Brunei.
Just like with any of the venues in the area your wedding video at the Dorchester will look extra stunning if you take some time out of your busy day to go for some shots in Hyde Park. 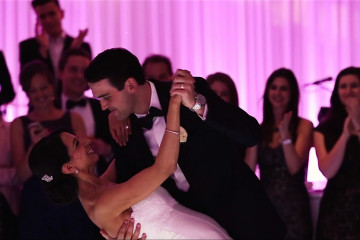 Nicola and Costa’s Greek wedding at The Dorchester